Freckled Ducks (Stictonetta naevosa) are a rare species of duck. On the evolutionary tree, they appear at the top of the branch that developed into ducks, geese and swans.

Brought here in 1993 as part of a CSIRO captive breeding program, Freckled Ducks bred here have been released in many wetlands across NSW and interstate. The species is now listed as vulnerable.

Freckled Ducks breed in the Lignum swamps of outback NSW and Victoria and depend on coastal wetlands to survive in times of drought.

You could adopt one of these cute Freckled Ducks. You can even name one! Ask at Reception about our Adopt-a-duck program or view online now.

These are males and they are getting ready for breeding.

Freckled Ducks are one of the rarest ducks in the world. They are a unique species thought to be a primitive type of waterfowl, before its ancestry differentiated into ducks, swans and geese.

Freckled Ducks are most active in the early morning and the evenings and rest up among dense foliage during the day. Freckled ducks are filter feeders so water is added to their food (layer pellets and budgie mix) and they ‘suzzle’ it up. In the wild they eat algae, seeds and aquatic grasses and sedges and small invertebrates.

Teepee shelters are provided for the Freckled Ducks to give some protection from the weather (if they so wish), especially to escape the heat of the day during summer. These shelters are also used as a nest site during nest building and breeding.

Logs are provided in the water for the ducks to loaf/roost on. Some logs are placed adjacent to the entry ramps to give easy access to the shelters from the logs. These logs are used as roosting sites by the ducks and especially by the ‘guarding’ males during breeding.

The top portion of the male bill becomes pink, and then reddens until it is a glowing vibrant red – indicative of their breeding condition and possibly their place in the hierarchy of the flock.

The Freckled Duck is most common to south-eastern and south-western Australia where they concentrate on inland wetlands when conditions are suitable. However, during drought years however they are often found in coastal districts.

The total number of ducks in the wild is uncertain. The most serious threat to the continued existence and well-being of these ducks is loss of habitat. 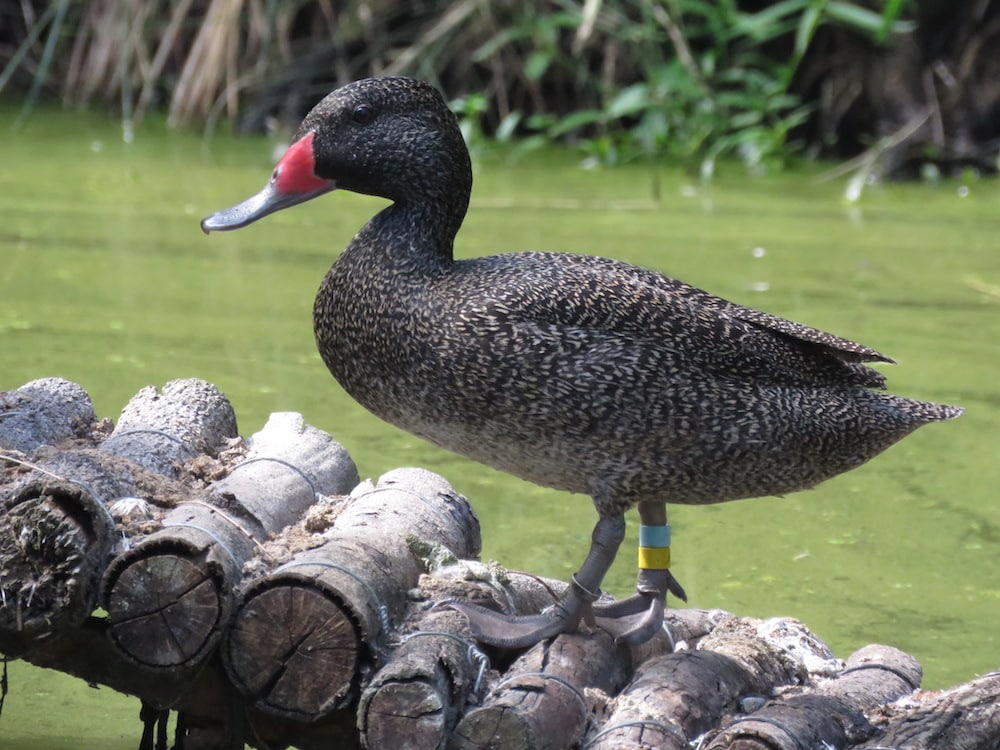 Find me at the Freckled Duck pond
Learn more